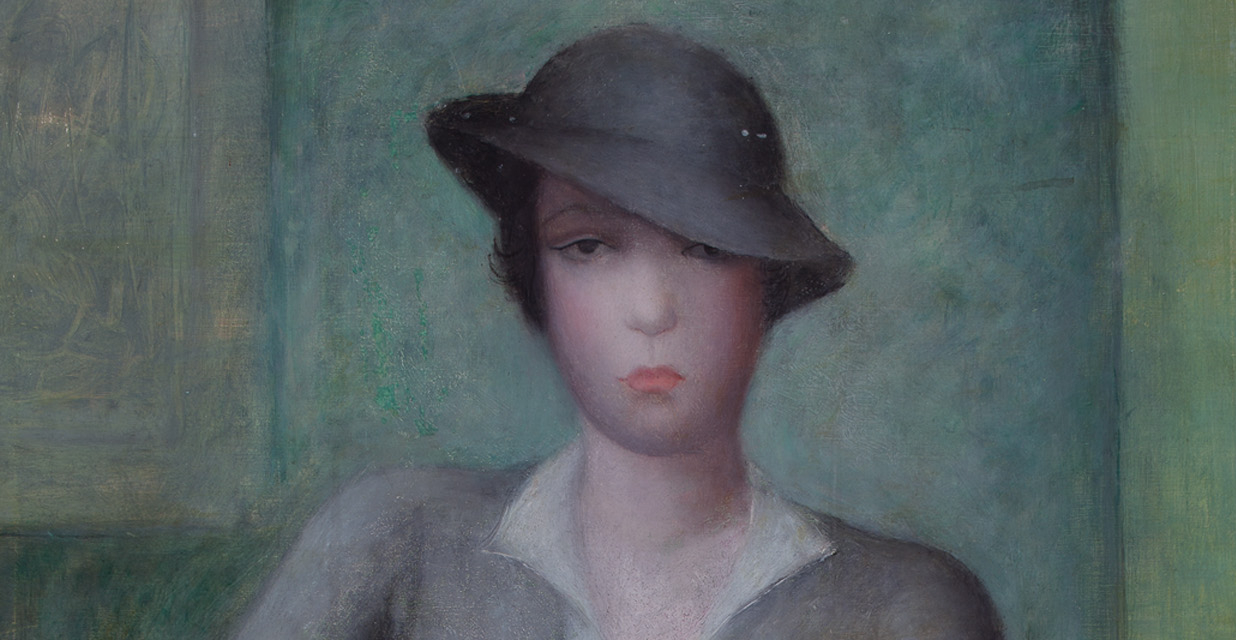 Fifteen female artists are featured in the exhibition at the Galleria d’Arte Moderna in Rome. Their destinies were sometimes interwoven; they shared their Jewishness and were penalised, in a lively yet not unprejudiced cultural context, for being women. Below we outline the life stories and careers of artists who were well-acquainted with the likes of De Chirico, Guttuso or Balla; their value has remained overshadowed for too long, and the exhibition Artiste del Novecento tra visione e identità ebraica gives it the attention it deserves.

Amelia Almagià Ambron. Born in 1877, a talented painter who trained at the school of Antonio Mancini, a Roman realist painter. Appreciated for her bright portraits and airy landscapes, she was the undisputed central figure of a lively cultural salon, frequented by various artists such as Marinetti, Giovanni Colacicchi, Mario Tozzi and Mancini himself. She had a deep, fraternal friendship with Giacomo Balla, and for many years she hosted the maestro and his family at her Cotorniano estate in the hills near Siena and later, from 1926 to 1929, at Villa Ambron in the Parioli district of Rome.

Wanda Coen Biagini. She was born in Pesaro in 1896 and died in Rome on 5 June 1953. A student of the Fine Arts Academy of Bologna, in order to complete her artistic training she moved to Rome, where she met and married sculptor Alfredo Biagini. Her intense work of painting and exhibiting in Rome was interspersed with various periods spent in Paris, during which she met the so-called Italiens de Paris, and particularly Giorgio de Chirico.

Paola Consolo. Born in Venice in 1909, where she died in 1933. Daughter to the poet Eugenia Consolo and a niece of Margherita Sarfatti, she was encouraged to show her work by Medardo Rosso. Having initially been influenced by the Impressionists, she later became involved with the Novecento group, as part of which she exhibited her works in 1926 and 1929. She also took part in the Venice Art Biennale in the years 1928, 1930 and 1932. She was much praised by Ardegno Soffici, and frequented the atelier of Funi; she captured his chromatic magic and enriched it with a womanly grace, and was also influenced by Campigli’s work for its simplicity of style.

Eva Fischer. Born in Daruvar (Croatia), at the end of the Second World War she moved to Rome, where she joined the group of artists in Via Margutta. During this period she met and became friends with Mafai, Guttuso, Campigli, de Chirico. During a prolonged sojourn in Paris, as a guest of Zadkine, she met Marc Chagall and became his devoted friend. Later, in Madrid, she worked at the atelier of Juana Mordò, and formed friendships with many Spanish artists, who were still fighting against Francoism. Her art stands out for its “Mediterranean” colours, and by a deep-seated, cheerful Italian-ness which defines its liquid, transparent effects.

Amalia Goldmann Besso. Born in Trieste on 14 October 1856, in 1883 she married the engineer Beniamino Besso, brother of the artistic patron and philanthropist Marco Besso and moved to Rome. She studied art under Lorenzo Delleani, and later in Rome with Camillo Innocenti. She travelled frequently and extensively around Europe, where she exhibited her paintings. She took part in the Venice Biennale from 1915 and in the Roman Secession from 1913. During the First World War, she dedicated her life to benevolent work, particularly for children. She died in Rome on 29 October 1929.

Pierina Levi. Born in Bologna in 1884 she, like Annie Nathan, was close friends with Balla, and she too studied with him for a long time. She was present at the 1st Roman Succession, and in 1912 and 1913 at the Esposizione Nazionale Giovanile in Naples. She died in Giffoni in early 1942.

Paola Levi Montalcini. Born in Turin on 22 April 1909, in the late 1920s she was close to Felice Casorati (whose studio was a gathering place for the young avant-garde of Turin), and to Italo Cremona. In 1931 she exhibited her work at the first Quadriennale dell’Arte Nazionale in Rome at the Palazzo delle Esposizioni, and in 1931 at the “Primo Raduno d’arte contemporanea”. In 1939, Giorgio de Chirico described, in the first book written about her, the early part of her creative and formal history. In the late 1940s she broke away from realism, and in her work evolved towards abstract expressionism, until firmly establishing her association with the abstract-concrete work of the MAC (Movimento d’arte concreta). After frequenting the atelier of S.W. Hayter in Paris (where she was introduced to the surrealist aesthetics of automatic writing) she focused on sculpture, and made kinetic-light structures. Having moved to Rome, where she died on 29 September 2000, in the 1970s her work was based on research which highlighted a new approach, on the cusp of art and mathematics.

Corinna Modigliani. Born in Rome in 1891, she and her younger sister Olga studied under the sculptor Pietro Vanni. In around 1888 she attended courses at the Scuola libera del nudo in Rome. Her early work (which remains for the most part unknown) shows a predilection for the minor arts, miniatures, paintings on velvet; she presented this work at the 70th Exhibition of the Società amatori e cultori di belle Arti in Rome in 1900, and at the 3rd Esposizione d’arte in Livorno in 1901. In the early 20th century, she began painting landscapes and still lifes, before becoming well-known in the genre of oil and pastel portraits. In 1921 she exhibited at the 1st Biennale Romana, and in the 1929 and 1930 Sindacali Laziali. She died in Rome in 1959.

Olga Modigliani. Born in Rome in 1873, she shared her life and artistic career with her older sister Corinna. They both studied with Pietro Vanni, who pushed Olga to dedicate herself to ceramic decorations, a speciality which was particularly popular in Rome at the time. Having established her reputation as one of the undisputed greats in this field, her work was included in a great many exhibitions. She took part in the Venice Biennale in 1914 and in the 1921 Biennale in Rome, and her pieces became part of both private and public collections. She died in Rome in 1968.

Annie Nathan. Born in Rome in 1878 she, along with her great friend Pierina Levi with whom she shared a studio in Vicolo S. Nicola da Tolentino, was among the habitués of Giacomo Balla’s studio. She took painting lessons from Balla, and began exhibiting at the Belle Arti exhibition and at exhibitions arranged by the Società Amatori e Cultori from 1906 to 1910. In 1908 her work was included in the Quadriennale in Turin, and in 1932 at the Roman Secession. In 1932 she had a solo show in the Cultori d’Arte halls in Palazzo Doria. She died in 1946 in Switzerland, to where she had fled during the Second World War to escape the race laws.

Liliah Nathan. Born in Rome in 1868 to Ernesto Nathan and Virginia Mieli. She and her sister Annie grew up in a socially and culturally elitist environment. She preferred to follow in her mother’s footsteps, and was renowned for her commitment to social and voluntary work. However, her work as a sculptor shows a skilled elegance which reveals her mastery of expressive means and a strong personality. She married the artist Moisé Ascoli, and died in 1918.

Gabriella Oreffice. Born in Padua in 1893, she always lived in Venice. There, she first began studying art at the Luigi Nono’s Scuola Libera di Pittura, and debuted in 1915 at the Mostra dei Bozzetti at the Hotel Vittoria. In 1920 she took part in the Biennale, and in exhibitions at the Fondazione Bevilacqua La Masa. She formed a sincere, lasting friendship with Semeghini and Rossi. Between the 1920s and 1930s she began an intensive schedule of exhibitions which, having been interrupted by the war, she picked up again in the 1950s. She died in Venice in 1984.

Adriana Pincherle. Born in Rome in 1909, following her studies in Classics, she enrolled at the Scuola libera del nudo. She made her debut in February 1931 at the “Prima mostra romana d’arte femminile” (First Roman Exhibition of Art by Women) and in April 1932 she, along with Cagli, held her first solo show at the Galleria di Roma. In 1933 she went to Paris, where she deepened her studies of the Impressionists, particularly Matisse. This proved vital to her evolution as a painter. Having married Onofrio Martinelli and moved to Florence, for many years she work intensively as an artist, focusing on a solid figurative language which was not strictly realist, and which used bright colours.

Antonietta Raphaël. Born in Kovno (Lithuania) in 1895, she moved to Rome in 1924 (where she lived until her death in 1975), having first spent time in London and then in Paris. She would return to the latter city many years later to cultivate her vocation for sculpture. In Rome she met Scipione and Mario Mafai, and with the latter formed the “School of Via Cavour”. She mainly worked in isolation, out of the public eye, and even after the war, despite her inclusion in major exhibitions, the critics ignored her work for many years. Only in 1952, thanks to the exhibition “La Scuola romana dal 1930 al 1945”, which was part of the 8th Quadriennale (1959-60), did she finally gain recognition for her leading role in art history between the wars.

Silvana Weiller, born in Venice, she worked and lives in Padua where, over the course of her long career, she has been a figure of great intellectual worth. Known for her exhibitions, she has also distinguished herself for her talents as a critic and a poet.