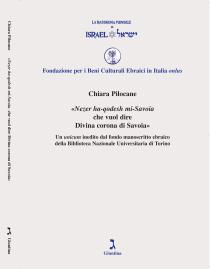 There was an excellent turnout with a packed hall last night at the State Archive of Turin, for the presentation of Chiara Pilocane’s book “Nezer ha-qodesh mi-Savoia, che vuol dire Divina Corona di Savoia”, (FBCEI- Giuntina, 2013).

The publication examines a manuscript of fifteen pages that was made by a Jewish man, Diodato Segre, and dedicated to the Duke of Savoy, Charles Emmanuel I in 1622. This exceptional work consists of part-prose, part-poetry, in both Italian and Hebrew.

Presenting the book were Andrea De Pasquale, Director of the Turin National University Library, the author Chiara Pilocane, Micaela Procaccia of the Archives General Directorship at MiBACT, and Isa Ricci Massabò, formerly director of the State Archive of Turin.

The discussion was moderated by Dario Disegni, President of the Foundation for Jewish Cultural Heritage in Italy, which made this research project possible by supporting it through a specially created study bursary.

The evening began with a keynote speech from the director of the State Archive of Turin, M. Barbara Bertini, who underlined her pride in the work of Pilocane, who herself has a diploma from the Turin State Archive, and in her book, in which she demonstrates a profound knowledge of the text and of its historical context.

After having thanked the Director for having granted the use of such a prestigious space, Dario Disegni went on to underline the FBCEI’s commitment to supporting an original work which reflects the Foundation’s own objectives of promoting and giving value to Jewish cultural heritage in Italy.

In his speech, Andrea De Pasquale expressed the wish to initiate, in Turin, a process to put the Jewish collections held at the National University Library to good use, thus continuing the work he carried out as Director of the Biblioteca Palatina in Parma.

De Pasquale noted how the relationship between Turin and Parma is based upon the common thread of Hebrew studies, citing two important 18th century figures from Piedmont: the abbot Gian Bernardo De Rossi and the typographer Gianbattista Bodoni.

In his conclusions, De Paquale recalled how, within the Jewish collection at the National University Library, this manuscript is the text to which the most studies have been dedicated. He therefore made an open invitation to continue such research, focusing on the practically unexplored goldmine that is the printed publications collection, which consists of items dating from the 15th, 16th and 17th centuries.

De Pasquale ended by underlining the remarkable nature of Pilocane’s study, which can be considered the first step in the process of developing the Jewish assets of the National University Library, and expressing his hope that the FBCEI will continue to support and contribute to this task. Pilocane then gave her thanks to the FBCEI; to Giacomo Saban, Director of the Rassegna Mensile di Israel; Daniel Vogelmann, founder of Giuntina publishing house; to the State Archive of Turin, and the National University Library.

The author then presented the numerous historical and literary peculiarities of the Nezer ha-qodesh mi-Savoia. Indeed, the text was one of the eleven manuscripts which survived intact the fire which broke out at the National University Library in the early 20th century.

Its composition is of remarkable literary interest: the verses are in both Hebrew and Italian but, unlike well-known works, the octaves in Italian are not translations of the Hebrew text, but standalone poems.

The text is also of important documentary value, both for the historical information provided directly by the author – information useful to reconstruct the history of the composition and of Diodato Segre – and due to the information on the social and cultural milieu of 16th century Jewish Turin that can be evinced from a critical reading of the manuscript.

And it was this aspect on which Micaela Procaccia’s talk focused; she pointed out the difficulty of studying the history of the Jews in Italy. Indeed, a recurring issue is the attempt to identify a point of equilibrium, and another of separation between national history and minority history.

With his work, the author of Nezer ha-qodesh mi-Savoia showed that the clear division imposed by the law did not result in outright social and cultural detachment, but that instead, the two worlds, mainstream society and Jewish society, continued to remain in contact, mutually enriching each other.

The evening closed with a speech from the former Director of the Turin State Archive, Isa Ricci. She pointed out how behind every academic there is a story, congratulating Pilocane on her tenacity and expressing the wish that society will once again adequately honour the humanistic studies which enrich our culture.

That honour which must rightfully go to the author and her study which, as the evening’s speeches alone served to show, has already inspired a lively cultural debate and seems set to continue.