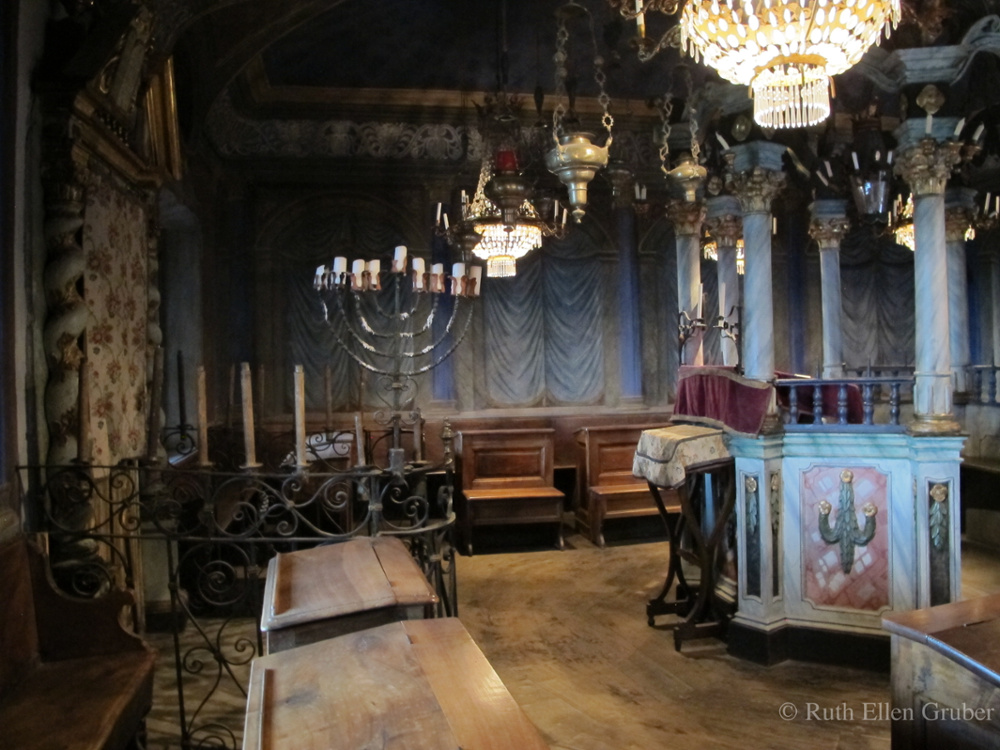 From Jewish Heritage Europe
Posted on September 8, 2017 by jhe

The ark in the synagogue in Casale Monferrato, Italy

Few other parts of Italy (or, indeed, of Europe) provide such a varied and spectacular array of Jewish heritage sites than does Piemonte — Piedmont — the northwest corner of the country along the French and Swiss borders.  Aside from in Torino, the capital, there are  centuries-old synagogues with all their fittings intact in nearly a dozen provincial towns, as well as Jewish museums, old ghetto areas, and Jewish cemeteries. (There are also a few disused synagogues, whose fittings were removed and transferred decades ago either to Israel or to another synagogue in Italy.)

The synagogues form two main groups: those built in the ghetto period  before the emancipation of Jews in 1848, and those built afterward, including the imposing Great Temple in Vercelli, built in the 1870s. Some of the synagogues built before emancipation are tiny but ornate prayer rooms located on the upper floors of ordinary-looking buildings and remain hidden behind anonymous walls; others were later modified and rebuilt, both inside and out, to be more visible and “church-like”.

The Jewish community in Piemonte is grappling now with how to make this wealth of Jewish heritage more easily accessible to the public. All the sites are within relatively easy reach of each other, but to date there is has been little coordination on visits, hours, or itineraries. Signage can be poor, with no indication of how to arrange a visit, and security and provision of guides remain issues, particularly for the tiny, pre-emancipation synagogues in small, upper-floor rooms. Jewish cemeteries may be found locked, with no indication of how or where to obtain the key or to visit.

The street in Mondovi where the synagogue is, occupying the upper floor of a normal apartment house. There is no signage for it.

The Jewish community in Torino is the owner of most of the synagogues: that in Torino itself and those in Alessandria, Asti, Carmagnola, Cherasco, Cuneo, Ivrea, Mondovi, and Saluzzo. It is working now with heritage management organizations to devise plans for coordinated visits and itineraries.

The tiny local Jewish communities in Casale Monferrato, Vercelli, and Biella (a branch of the Vercelli community) manage the synagogues there.

All the intact Piemonte synagogues are open to visitors on the annual European Day of Jewish Culture, which takes place this year in Italy on September 10. We posted recently about the new smartphone and tablet app for the synagogue complex in Casale Monferrato, which includes the region’s most opulent synagogue as well as a museum of Judaica and Jewish history and a unique museum of contemporary artistic interpretations of the Hanukkah Menorah.

A key challenge of managing Jewish heritage sites, whether revitalized or well-preserved synagogues and cemeteries such as in Piemonte, or disused, neglected, even ruined sites elsewhere,  is what to do with them — and how to do it.  This goes for places where there are Jewish communities as well as for where Jews no longer live. Tourism (including visits for educational reasons)  is one of the main ways that Jewish heritage sites can be developed and valorized, both for Jewish communities and visitors and for the general public. Issues related to Jewish Heritage Tourism will be discussed at an international conference on the subject to be held in Venice October 23-25.

We present here  photo galleries of some of the Jewish heritage sites in Piemonte, to give a hint at these precious places.

A good place to start is the tiny Baroque synagogue in Carmagnola, dating from the 18th century, located on the upper floor of a ghetto building, and reached by a winding staircase. It was recently restored and the complex includes an excellent exhibition about synagogues in Piemonte. The sanctuary itself is square room lit by seven big windows that are surmounted by stucco ornaments and separated by stucco decorations framing Hebrew inscriptions. The octagonal bimah, set in the center of the room, dates back to 1766.

The synagogue in Mondovi is on the upper floor of an apartment building. There is no indication from the outside that it exists. The prayer room lit by five hanging crystal chandeliers and centered on an ornate octagonal bimah and a gilded ark featuring a sculpted menorah.The view from its porch is spectacular, and in an adjoining room, school benches preserved in place still bear the scars of children who carved their names in them.

The synagogue in Saluzzo is located on the top floor of a Ghetto building, entered from a courtyard. The prayer room dates from 1832 and probably represents a remodeling of an earlier synagogue there. It is characterized by a marvelous ceiling fresco incorporating symbolic imagery.

The synagogue in Alessandria was built after Emancipation, in 1867-71, as the largescale refurbishment of a building where a ghetto-era prayer hall had existed on an upper floor.

The synagogue in Casale Monferrato is the most opulently elaborate of the Piemonte synagogues, but there is no indication from the street that it exists — other than today’s signage. It was originally built in 1595 in the heart of the old Jewish ghetto, but over the following two centuries it was enlarged, redesigned and redecorated in a sumptuous rococo style. There are regular visiting hours on most Sundays, and visits can be arranged during the week by appointment.

The baroque synagogue in Cherasco is a tiny room on the top floor of an anonymous house in the one-time ghetto. Jewish presence in the town dates back to the 16th century. The synagogue as we see it is probably a renovation carried out in 1797 of an earlier prayer room. Its main features are the octagonal central wooden bimah, with twisted columns, the sculpted wooden ark, and the frescoes wall texts. There is an exhibit of photographs of Piemonte synagogues in an adjoining room. The building and synagogue were restored after 2003, and the site is maintained by the Fondazione DeBenedetti Cherasco 1547.

As we see it today, the synagogue in Cuneo dates from a remodeling that took place after emancipation — it was inaugurated in 1885. The bimah is directly in front of the elaborate ark, rather than in the center of the room in earlier synagogues. The complex also includes a modern library and function room.

The synagogue in Asti has undergone many changes and remodelings over the centuries. Today we see it in its post-Napoleonic and  post-emancipation incarnation form, dating from 1889, with a tall dome, four central pillars, large windows, and the bimah in front of the gilded ark. The synagogue complex has a small permanent exhibit of Judaica, documents, and other artifacts. Another sign of post-emancipation acculturation is the presence of a columbarium for funeral urns in the Jewish cemetery, which contradicts traditional Jewish burial practice.

Read an article by Samuel D. Gruber on the Synagogues of Piedmont