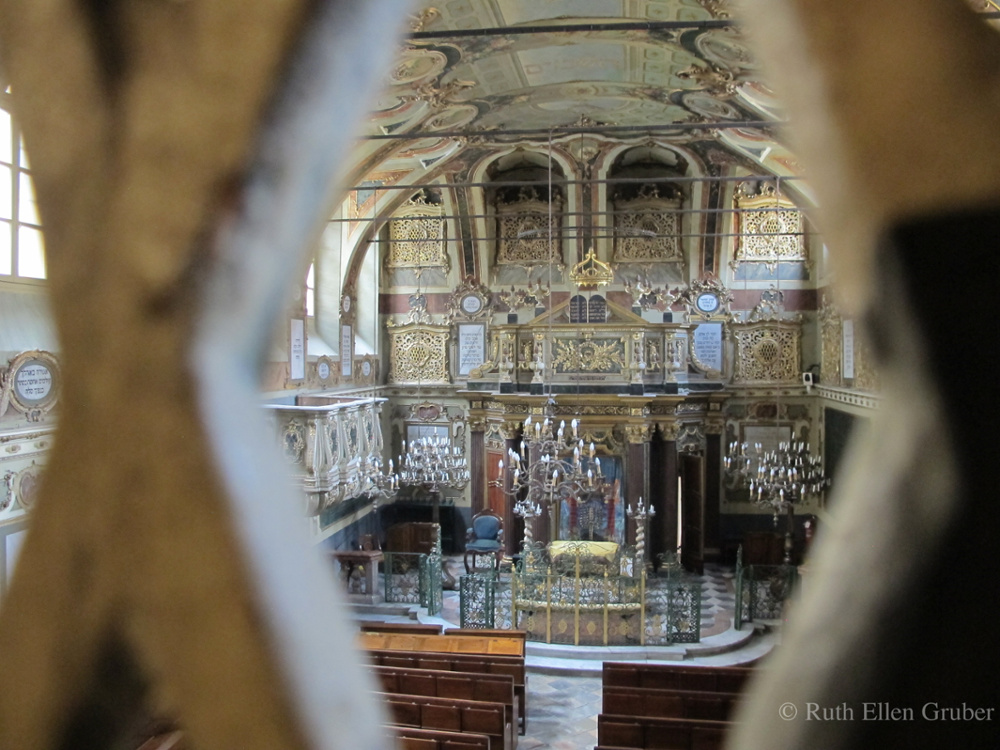 From Jewish Heritage Europe
Posted on September 5, 2017 by jhe

A new interactive smartphone and tablet app guides visitors — and armchair travelers — through the splendid synagogue and Jewish museums of Casale Monferrato, located in northwest Italy’s Piemonte region, between Milan and Torino.

The app, which is available in both IOS and Android platforms, was formally launched at an event in the synagogue on Sunday, with full activation scheduled for the evening of September 9.

The synagogue in Casale Monferrato is the most magnificent of the 12 synagogues in Piemonte that remain preserved with their interior decor and fittings intact. Originally built in 1595 in the heart of the old Jewish ghetto, it was enlarged, redesigned and redecorated in a sumptuous rococo style over the next two centuries.

The synagogue in Casale Monferrato, looking away from the Ark

The opulent decor boasts huge gilded chandeliers, and white, cobalt and gold-colored walls on which Hebrew inscriptions are framed by gilded stucco work. The Ark (whose current form dates from 1787) features fluted Corinthian columns and an elaborately carved decorated frieze and cornice. The bimah is placed directly in front of the Ark, with the entire area screened by an elaborate wrought iron grille.

The ark in the synagogue in Casale Monferrato

The magnificent synagogue is hidden on the outside behind the anonymous walls of what was once a ghetto street — at vicolo Salomone Olper, 44.

The community’s museum, which includes precious ritual objects, embroidered textiles, documents, photos, and displays, opened in 1969 after extensive renovations of the synagogue and is housed in the former women’s gallery.

A second museum — the Museum of Lights — occupies the basement, in the vaulted space that once housed a matzo bakery and mikveh. It is dedicated to a unique, and growing, collection of scores of sculptural Hanukkah menorahs created by contemporary artists.

In the Museum of Lights, Casale Monferrato

For visitors to the synagogue, the new app engages with 14 sensors positioned through the complex that make it possible to recognize where visitors are standing and activate the specific audio comment (in Italian) or video included on the narrated guided tour.

It also includes commentary, photos, and a virtual tour of the synagogue and museums that can be viewed offline.

The app integrates with the Jewish community’s extensive web site, in English and Italian, that highlights the synagogue complex and museums, as well as other local Jewish heritage sites — and also includes a virtual tour.

The Jewish community of Casale reached its peak in the 19th century, when it numbered some 850 members. Today, however, it numbers around 70 members — but only seven of them live in the town.

The synagogue complex is open:

Closed:  on Saturday and Jewish holidays.