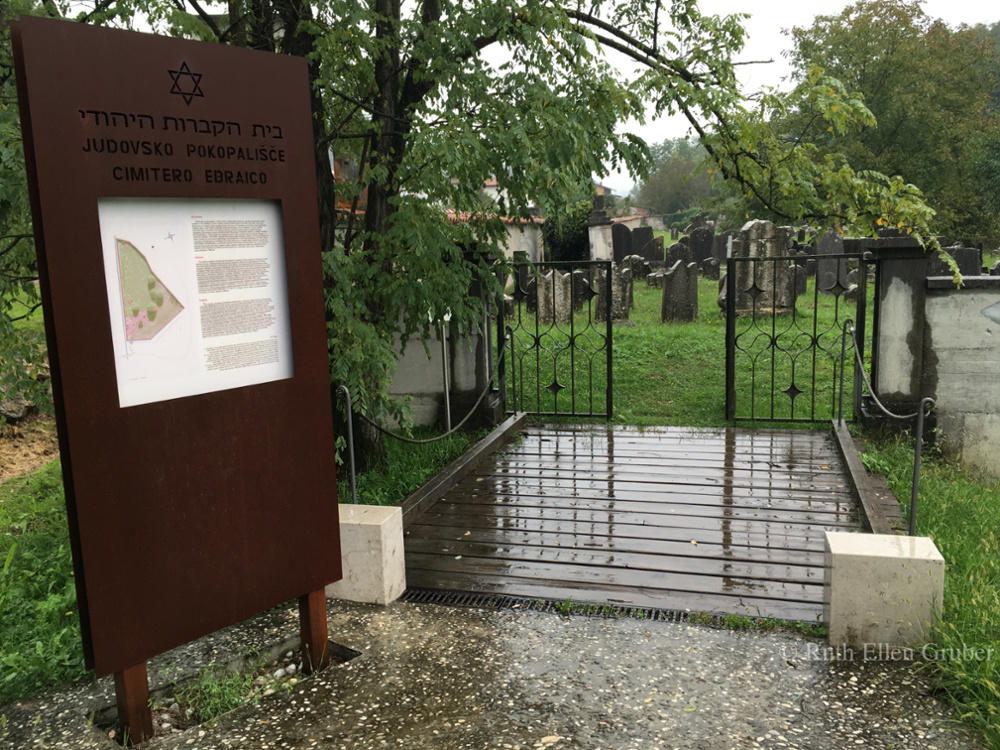 The historic Jewish heritage sites of Gorizia, in northeastern Italy, comprise a rare example of local Jewish sites separated by an international border: the 18th century synagogue and former Jewish ghetto area are in one country, Italy …. and the Jewish cemetery is in another — Slovenia. (Another example is the historic Jewish cemetery in Slubice, Poland — on the border with Germany outside the German town of Frankfurt an der Oder.)

Both Italy and Slovenia are in the Schengen area of the EU, and the border is pretty much invisible.

An international Slovenian-Italian project, spearheaded by Italy’s Foundation for Italian Jewish Cultural Heritage and with the architect Andrea Morpurgo as project leader and  architect Renzo Funaro as coordinator, is now under way to fully document and restore the cemetery, which lies just a few hundred meters over the border in the Nova Gorica suburb of Rozna Dolina, or Valdirose.

(The synagogue is owned by the Gorizia municipality, and the cemetery by the Nova Gorica municipality; there is no Jewish congregation in Gorizia.)

General view of the Jewish cemetery in Nova Gorica, with the ceremonial hall in the background.

Shaped like a triangle, the cemetery occupies around 5,000 square meters and is enclosed by a thick masonry wall. There are approximately 900 gravestones, but many are not in their original location and some were brought to the cemetery from elsewhere. The oldest gravestone in the cemetery dates from 1371 — a  monument to “Regina, daughter of Zerach, wife of Benedetto” — but it was brought from Maribor to Gorizia in 1831. What is believed to be the earliest identified stone from the current cemetery dates from 1652.

The ceremonial hall was a casino in 2006

There is a ceremonial hall, originally built in 1928: a simple building with a peaked roof and a small attached structure to one side. It was in ruinous condition after World War II, and the then-existing Gorizia Jewish community gave the building to the municipality of Nova Gorica in 1977 in return for guarantees that the municipality would maintain it. It was reconstructed in the 1980s — but was used as a cafe and then, until a few years ago, a gambling casino.

Currently, it stands empty following further renovation — and the crossborder plan to restore the cemetery foresees the installation there of an Information Point and exhibit on local Jewish history.

This will provide a complementary resource to the synagogue, which  houses a  Jewish museum that opened two decades ago. Part of its focus is on some of the notable figures who lived in Gorizia and are buried in the cemetery — most notable among them, the early 20th century philosopher Carlo Michelstaedter, a precursor of existentialism, who was born in 1887 and committed suicide in 1910. (Click to see material on the museum in Italian.)

The  restoration of the cemetery will entail several stages, with a total cost estimate of around €500,000. Some of the work foresees the involvement of students as participants in a hands-on restoration and documentation project.

–archival and historical research on burials and other information

— detailed mapping and topographical relief of the cemetery, with digitalization and creation of a database.

— On-site research to determine the presence of gravestones that remain hidden or buried under the surface.

— Analysis of vegetation/pests; removal of encroaching vegetation; regulating other vegetation.

— Documentation and cataloguing of gravestones and monuments; also assessing their state and restoration needs.

— Repair and rebuilding of the surrounding wall; repair or substitution of gates.

— Resetting and/or restoration of the gravestones.

Volunteers from the Friends of Israel Association in Gorizia, which manages the synagogue and museum, have been carrying out a preliminary survey of the cemetery in the past few months. Jewish Heritage Europe Coordinator Ruth Ellen Gruber is grateful to Friends of Israel President Lorenzo Drascek, who is carrying out this work, for taking her on a tour of both the synagogue and the cemetery.

The Morpurgos had their origin in the town of Maribor — known in German as Marburg — in northeastern Slovenia, whose medieval synagogue is now used as a cultural center. They spread out through much of Europe after Habsburg Emperor Maximilian I banished Jews from the provinces of Styria, Wiener Neustadt, and Neunkirchen in the 1490s.

Andrea Morpurgo curated an exhibition at the synagogue in Maribor this past summer about the Morpurgo family, its history, and its present.