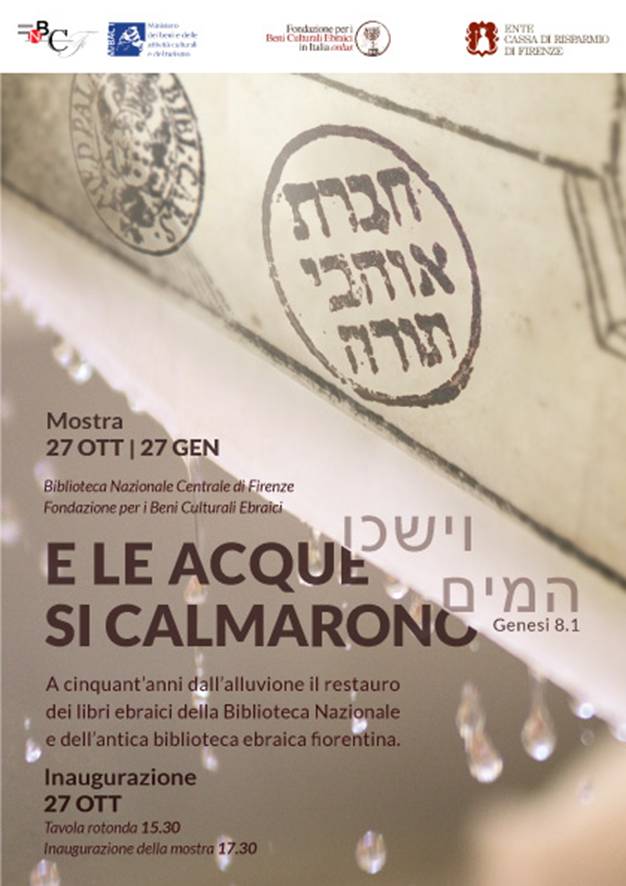 Hundreds of books, printed volumes and artefacts. Precious evidence restored to life once again. An extraordinary, symbolic return to the city.

“E le acque si calmarono” (“And the waters calmed”), is a major exhibition dedicated to the Jewish heritage struck by the fury of the River Arno. It will officially open on Thursday 27th October at 5.30pm at the Biblioteca Nazionale Centrale in Florence, preceded at 3.30pm by a conference on the historical significance of Jewish cultural heritage in Florence ever since its origins. The exhibition is one of the most hotly anticipated events among those scheduled in the Tuscan regional capital to mark the Fiftieth Anniversary of the Great Flood.

The volumes included were salvaged and restored thanks to the Foundation for Jewish Cultural Heritage in Italy, along with Florence’s public library, the Biblioteca Nazionale Centrale, and the valuable contribution of the Ente Cassa di Risparmio di Firenze. Having been restored, they will allow visitors to explore the centuries of history of the Florentine Jewish Community, its contributions to the city’s cultural and economic progress, and the many notable figures who made a difference.

“Fifty years on, we have managed to return a fundamental legacy to our city, which illustrates the Jewish community’s attachment to tradition and to the history of Florence”, said Renzo Funaro, President of the Opera del Tempio ebraico di Firenze, which promoted and coordinated the initiative on behalf of the Foundation, along with Silvia Alessandri of the Biblioteca Nazionale.

“This is a momentous occasion which allows us to give the Jewish Community’s legacy of books back to Florence on a permanent basis, housing them in a prestigious location”, says the President of the Foundation, Dario Disegni.

Luca Bellingeri, Director of the Biblioteca Nazionale, adds, “This initiative is also a crucial opportunity for research and reflection upon one of the lesser-known consequences of the devastating flood that took place fifty years ago”.

Alongside works from the Florentine Jewish Community’s wealth of books and documents, incunables and sixteenth century works will also go on display, along with many restored, flood-damaged antique books from the Biblioteca’s own archives, which have been restored.

Partners of this initiative include the Regione Toscana, the Comune di Firenze, the Unione delle Comunità Ebraiche Italiane and the Ambron Castiglioni Foundation.

The press conference presenting the exhibition will be held on Wednesday 26th October at 12 noon at the Biblioteca Nazionale.