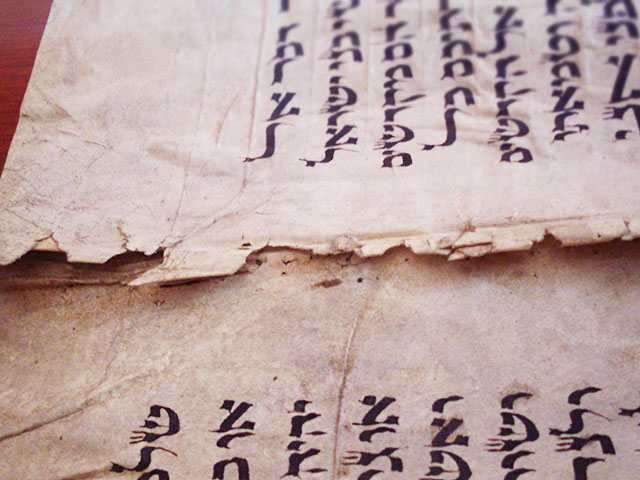 On 12 February 2015 in Turin, the inauguration will take place of the exhibition “Judaica Pedemontana”, curated by the Director Andrea De Pasquale. The exhibition will be open until 6 April. It aims to show the public, for the first time, the incredible wealth of Jewish books held at the Biblioteca Nazionale Universitaria in Turin. The library’s vast collection of Jewish texts consists of manuscripts and printed books, and notably a large number of incunables and 16th century works. Some of the Jewish texts are scattered through various sections of the Library, such as in the special incunables section, and the Reserve Section among the most valuable printed books; while others are grouped together in separate collections, such as the Hebr. Collection which contains only antique books in Hebrew characters. Among the most interesting incunables we can mention the first edition of the Arba Turim by Jacob ben Ascher, printed at Piove di Sacco by Meshullam Cuzi in 1475 (XV.IV.10); a Comment on the Pentateuch by Levi ben Gerešon, printed in Mantua by Abraham Conat and Abraham Jedidiah probably between 1474 and 1476 (XV.III.57); a parchment copy of the Pentateuch with the Aramaic paraphrasing of Onqelos and a comment by Šelomoh Jishaqi, printed in Bologna in 1482 (XV.III.77); various incunables printed at Gershom ben Mosheh Soncino’s typographic works. Other books, incunables and 16th century printed works are particularly remarkable both in terms of the edition and the notes, some by censors, made in the body of the text. The search for Jewish texts to purchase for the library’s collections goes back to when the library of Turin’s Regio Ateneo was founded. Victor Amadeus II– whose guidelines were later adopted by his successors too – wanted the library to be directed by a cultured, open-minded person; he demanded that its head librarian be royally appointed, and from his time onwards, those selected were always university professors, often Full Professors in the discipline of Holy Writing and oriental languages. The study of Hebrew was, then, practised regularly by the royal librarians who, with their skill and knowledge, expanded the library’s collections considerably with precious books in Hebrew. Most of the manuscripts and incunables have been discovered and studied, while the printed books dating from the 16th – 18th centuries are still relatively unexplored. Deeper study of some of these latter volumes leads to some concrete, interesting discoveries. Indeed, this large collection contains some texts which were barely known about until now, except for a few rare copies, and perhaps even some editions which nobody knew of at all. The idea to organise an exhibition about the library’s Hebrew holdings thus provides a chance not only to make visually available a legacy which had never been displayed before the general public, but it also opens up the possibility for research which may highlight some salient details of this exceptional collection of books with a view, one hopes, to further, more in-depth studies. The exhibition of books in display cases will be backed up by a digital version, giving visitors the matchless sensation of being able to consult and leaf through a historic text. The cultural project of the exhibition also sheds light on the long history of Jewish typography and printing, and includes a display of antique letter punches which were used in the past to print the texts in the exhibition. The decision to stage the exhibition in Turin during Italy’s semester holding the Presidency of the EU Council reflects the desire to give wide-ranging, international visibility to the event. Furthermore, during the final period of the exhibition in Turin, a study day will take place. Again, with the intention of placing the event in a European context, this will involve the following figures, who have already given their availability to take part: Frédéric Barbier, lecturer at the École Pratique des Hautes Etudes of Paris; István Monok, lecturer at The University of Szeged (Hungary); Yann Sordet, director of the Bibliothèque Mazarine in Paris; Pedro Catedra of the University of Salamanca.