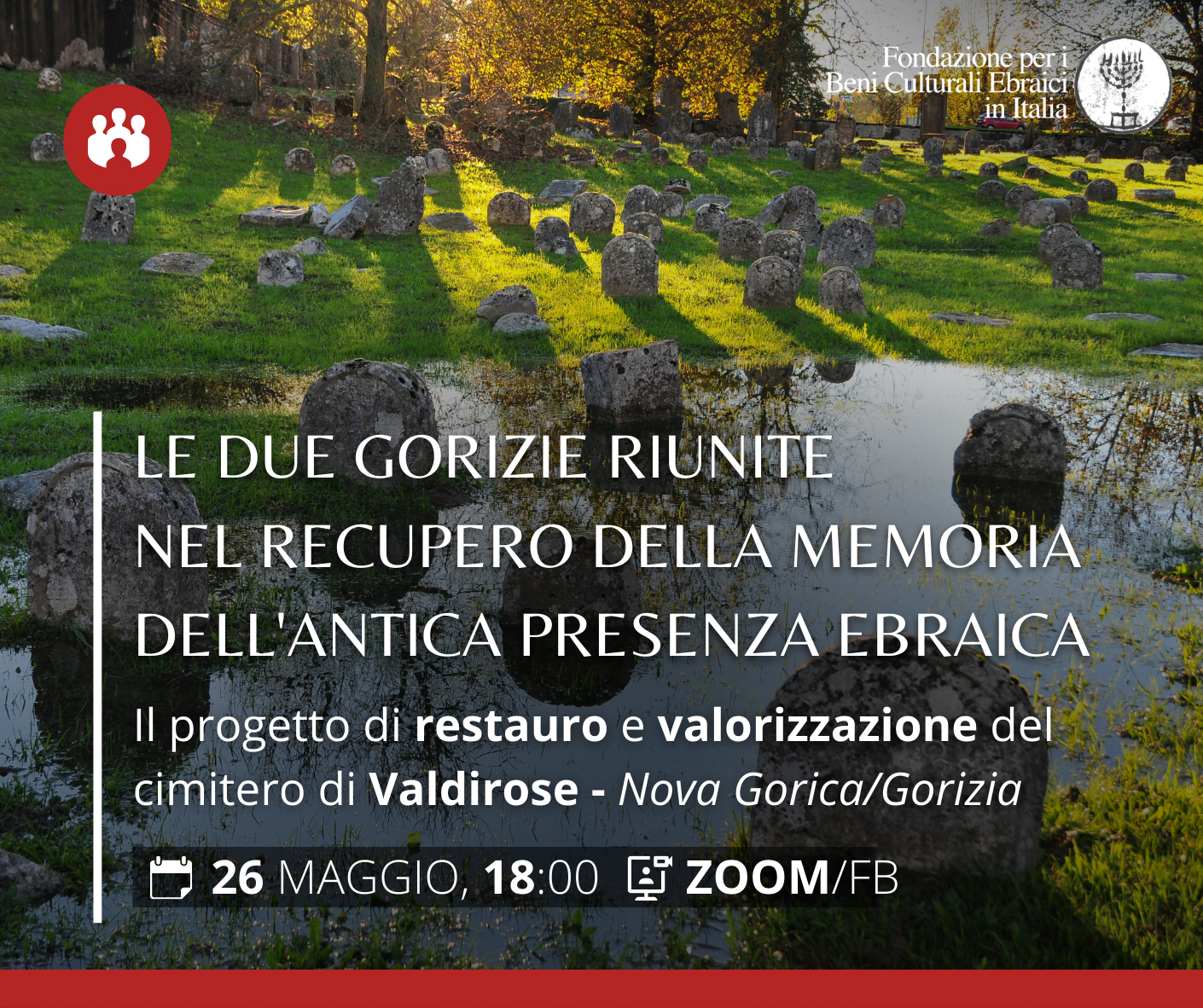 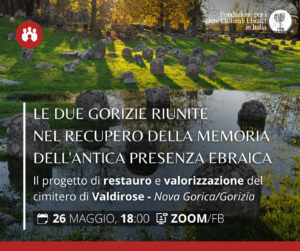 Historical Background
Maddalena Del Bianco – Full Professor of History of Religions, University of Udine
– Jerusalem on the Isonzo River: a History of Jews in the District of Gorizia
Renato Podbersič – Historian, University of Nova Gorica
– The History of the Jewish Cemetery of Valdirose

The Foundation for Jewish Cultural Heritage in Italy (FBCEI- Fondazione per i Beni Culturali Ebraici in Italia) was established by the Union of Italian Jewish Communities (UCEI- Unione delle Comunità Ebraiche italiane) in 1986, with the aim of restoring, conserving, refurbishing and promoting the Italian Jewish historical and artistic heritage and disseminate the relevant information in Italy and abroad. FBCEI aims to be a point of reference and support for Italian Jewish Communities, and in particular for the smaller ones, in developing their activities.
FBCEI also develops projects in areas where there is no longer a Jewish community with the aim of protecting, conserving and enhancing cultural heritage where possible, in particular, of places of worship, ghettos, buildings and cemeteries and any other artistic or bibliographic heritage, so that this memory may become an added value.

The memory of the Jewish presence is a key part of an identity, a tessera in a mosaic of other memories, that is the historical wealth and identity of a given territory.

The protection and promotion of cultural heritage also sees the Foundation focussing on its ability to generate economic value through tourism and cultural value through the dissemination of knowledge.
In this context, the project for the restoration and promotion of the Gorizia Jewish community cemetery, located on the Slovenian side, Valdirose (Nova Gorica) a few metres from the border, is both important and specific to the area. This is what informs a second appointment of the 2021 cycle of online seminars devoted to this project, developing a complex discussion with many of the parties to it that are working for its success.

The Project
A presentation by Andrea Morpurgo, Project Manager and FBCEI Director will focus on the restoration and promotion project for the Valdirose Jewish Cemetery, followed by Renzo Funaro, FBCEI Vice-President who will illustrate the methods used the restoration of the cemetery to be implemented with the most advanced technical systems of detection, cataloguing and conservation.
The various phases of the project can be briefly outlined as follows
Preliminary phase – General (Topographic) survey (in progress)
In the absence of computerised mapping instruments, a basic topographical survey is required to for a correct morphological, orographic and altimetric definition of the area under study, as well as the position of the tombstones in the site under study and intervention.
The Infopoint Project: learning about the Jewish cemetery of Valdirose
On the first floor of the former funeral tempietto, the project envisages an exhibition and information space (panels + computerised media) on the history of the Jewish cemetery, its community and the famous people buried there. Further additional complementary initiatives are also planned.
The Restoration and Promotion of the Jewish Community Cemetery of Gorizia
– State of the site
A field with 400 gravestones in an area of 4,684 square metres. Figures correspond to roughly about half of the area considering that the 1976 census listed 692 tombstones. This means one can reasonably expect at least a further 300 broken and fallen tombstones are buried in the grassy soil.

Historical Research
Archival research will include indirect sources on the history of the site, from its establishment and/or foundation to the present day.
A historical-architectural report will be drafted when the work is finished.
A computerised Data Mapping
The aim is to set up a computerised map inputting the data on the surveyed and registered tombstones in the relevant digital maps, thus linking the alphanumeric, graphic and photographic data with the topographical ones.

Nova Gorica/Gorizia: European Capital of Culture 2025
The last contribution will analyse the prospects of this important cross-border project, in the context of Nova Gorica and Gorizia as European Capital of Culture 2025. In the Foundation’s opinion, the project could become an added value one of the strategic key elements, a virtuous circle improving the well-being of the territory and its community. However, this approach requires implementing the existing synergy between the Foundation and the various institutional and private points of reference. It will also be essential to identify the European, as well as national and regional public and private funding channels required to successfully complete the project.
Paolo Verri, Cultural Manager, former GM of the Matera Basilicata 2019 Foundation, will introduce a new perspective aimed at the younger generations on the basis of his experience in re-launching Matera from a cultural, tourist and economic point of view. His approach will focus above all on the socio-economic profiles that have a positive impact on such initiatives. He will be followed by Lorenzo De Sabbata, ISIG researcher and Coordinator of GO! 2025, Committee for Nova Gorica/Gorizia European Capital of Culture 2025.
In conclusion, the project intends to build a bridge between the past and the future and the Foundation is taking a synergic approach with a variety of institutional, private, economic and cultural players that are essential for its success.
The Municipality of Gorizia, the Municipality of Nova Gorica, the Community of Trieste , the University of Udine, Beneficientia, a charitable Liechtenstein foundation, which has generously funded FBCEI in getting the project off the ground, and the GO! 2025 Committee are the first institutions and associations to have joined this stimulating and challenging adventure.
We are looking forward to a lively discussion with the above speakers, technical experts and historians in the Zoom seminar on Wednesday 26 May 2021, at 6 pm.